So the exciting news is that Deana and I made an offer on a house here in Boulder and it was accepted. There’s still plenty that can go wrong but there’s a pretty good chance that we’ll be home owners by the end of the year. Now on to all the horrible stuff I’ve been reading over the last week.

Ferguson and the police

I’m going to call out Vox for doing awesome reporting on Ferguson and the police in general. The number of links to their site this week is a reflection of that.

That got us thinking: how much danger do the nation’s police officers face on the job? 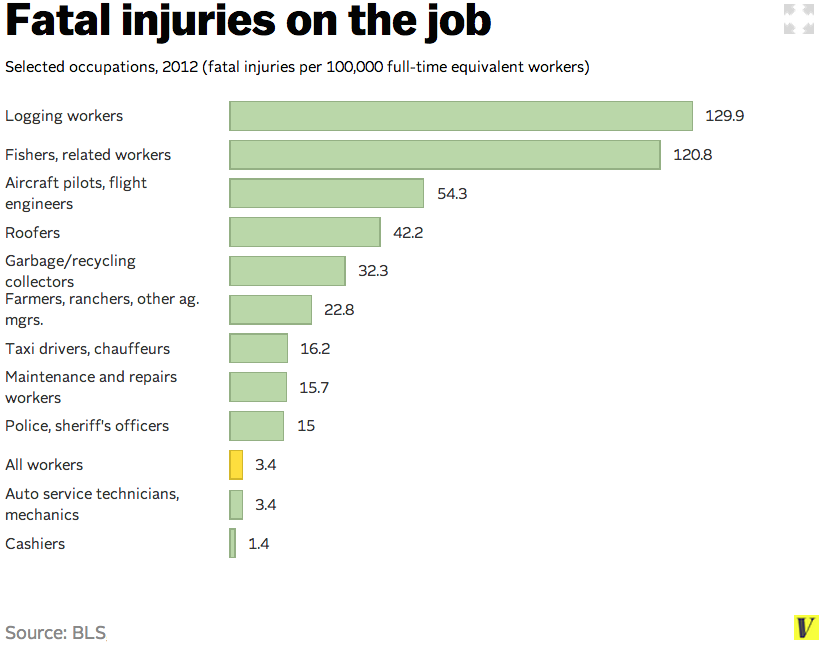 Congress has been a willing participant in the arming of the police for years now, and the man most responsible for this trend graduated from Congress to the executive branch: Vice President Joe Biden. http://www.vanityfair.com/online/daily/2014/08/militarization-police-force-ferguson-congress

Asked why MRAPS were being used in Ferguson, a place with neither land mines nor IEDs, Ferguson police chief Tom Jackson replied that “people are using bombs now.” However, there have been no reports of bombs being used in Ferguson — he may have been making an existential point about bombs being items that exist in the world. http://www.vox.com/2014/8/18/6003377/ferguson-military-gear

Policing without a nametag can help you avoid accountability from the press or from citizens, but it can’t possibly help you avoid accountability from the bosses. For that you have to count on an atmosphere of utter impunity. It’s a bet many cops operating in Ferguson are making, and it seems to be a winning bet. http://www.vox.com/2014/8/19/6043483/ferguson-police-impunity

We start the war on crime in 1965, which, of course, is very much in response to these urban rebellions. Because politicians decide that protests against things like police brutality are exactly the same thing as crime — that this is disorderly. This is criminal. http://www.vox.com/michael-brown-shooting-ferguson-mo/2014/8/19/6031759/ferguson-history-riots-police-brutality-civil-rights

“I keep thinking about the times when I have called 911 because I have encountered a mentally ill person in public who seems unsafe. I don’t know how I would live with it if this had been the result.” http://www.vox.com/2014/8/20/6051431/did-the-st-louis-police-have-to-shoot-kajieme-powell

The result is what appears to be the first arms race in which the opponent is the general population. http://harpers.org/archive/2010/03/the-soft-kill-solution/?single=1

He made a mistake, she should not be crucified because a black man instigated his own death. http://m.motherjones.com/politics/2014/08/darren-wilson-donors-racist-ferguson

No government—not the federal government, and not the thousands of municipalities that give their police forces license to use deadly force—wants you to know how many people it kills and why. http://gawker.com/what-ive-learned-from-two-years-collecting-data-on-poli-1625472836

“There are many youngsters who only three days after they’ve been deported are killed, shot by a firearm,” said Hector Hernandez, who runs the morgue in San Pedro Sula. “They return just to die.” http://www.latimes.com/world/mexico-americas/la-fg-honduras-deported-youths-20140816-story.html

There is a long and sorted history of western pharmaceutical companies doing clinical trials in Africa and subjecting Africans who are poor or under-educated to experimental drugs that would never be used there be used on westerners. http://www.vox.com/2014/8/17/6003477/the-case-against-experimental-unproven-treatments-ebola-outbreak

Just a reminder, if the headline asks a question the answer is always no:

Can the G.O.P. Ever Attract Black Voters? http://www.nytimes.com/2014/08/12/opinion/can-the-gop-ever-attract-black-voters.html

The best minds of our generation are obsessed with manipulating the movement of your thumb on a smartphone touch-screen. http://www.salon.com/2014/08/04/how_mark_zuckerberg_sells_snake_oil/

the uber effect: a random dude just tried to get in my car. #sfpriusproblems http://valleywag.gawker.com/people-keep-getting-into-strangers-cars-because-they-th-1623164934